August 15, 2018
Someone  read my button-painting tutorial and asked a question and blogger wouldn't give me her email so I couldn't answer.  But she persevered and reached me through Etsy.  Since the answer was going to be lengthy I thought I would post it here in case anyone is curious how I started or where I got buttons and what about those pesky holes.  Her question was: "When you use putty to plug the holes on the buttons do you take the putty out when you’re done? Which is more desirable?"  and "Where to buy buttons." 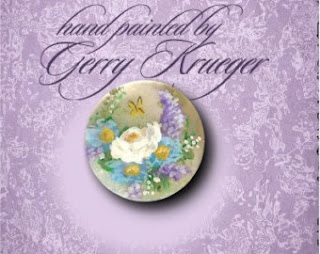 I started painting buttons about 15 years ago and I did them to add to each round robin block  as a personal touch.  For a long time dear Susan Elliott kept urging me to paint and sell them... It took a while but I finally listened to her...  At that time a woman sold buttons on Ebay under the name Button Glutton.  She had bought a house that had an outbuilding that was packed with inventory from a turn-of-the-century-button factory.  I initially bought her lovely 1 1/8" blank mop buttons as she posted them on ebay and finally contacted her and bought all she had (400) at $1 a button. After I went through them I bought all her 1" buttons...now long gone. 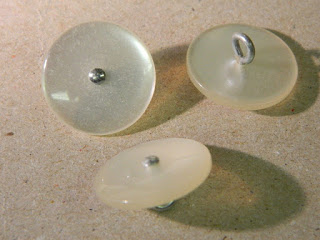 Then I started painting the vintage ones with a wire center shanks.  I still have about a quart of these antique ones left.

The shanks in the center were a problem and I handled it in several ways. 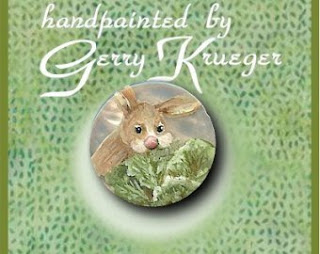 First I incorporated the metal "nub" into the designs....the nose on the rabbit. 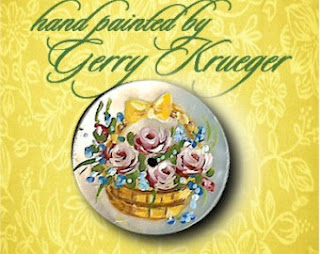 Another solution was to take the shank out and paint a design around the hole and someone could attach it with a bead that would blend with the design.

And of course I often filled the hole with putty. 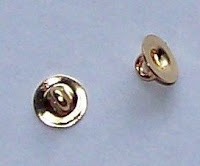 But to answer Andrea's question   when I fill a hole or holes with putty I add a metal shank to the back.  These shanks are readily available on Etsy.

Now the question where to buy buttons... The really old ones are so expensive anymore that it is not practical to paint them to sell.  The antique 2" ones of mine which I used to paint pet portraits on are all gone now. I did the portraits for $25 and I only see this size for sale for around $20  per button unpainted.   I rarely see the high quality vintage 1 1/8" and 1 1/4" ones. You have to be cautious because most of the ones you see on ebay and etsy are newer and  thin, warped and very poor quality. I have been painting for the last couple years on really nice, high quality MOP blanks I found and adding shanks to them.  I did the same as before and bought in bulk when I had the chance.  But for just a few to paint on I would recommend both Etsy and Ebay for vintage ones. 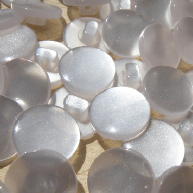 Now having said all that.... who says it has to be mother-of-pearl.... I just happened to start with gorgeous antique ones and became addicted to the luminosity of MOP.  There are perfectly lovely plastic buttons that would work just as well and I have some fantastic old flat brass  ones I've used for barns but would be good for anything...

And I used some of the cheap warped square ones and painted on them to use to back the anniversary quilt...fantastic. 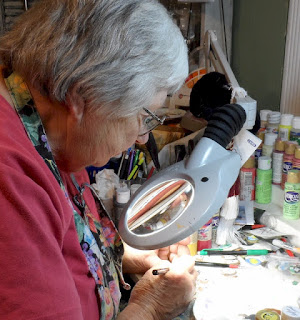 Because of overwhelming vision problems I'm not painting 1" buttons anymore but enjoyed it all the years I did.  I encourage anyone interested to read the tutorial and give it a try.

Janice said…
The button glutton that you talk about sounds very familiar to me. Was it in Calgary Alberta? I visited her shed which was a single garage. It was like stepping into Aladdins cave. Buttons wall to wall and floor to ceiling. She had bought them from a defunct factory in Montreal. There were over a million buttons!! Then she moved away and I found her again in British Columbia in the same city that my sister lives in. I went to visit again and while not quite as quaint as the garage it was still an amazing place. The business was in her house, which was huge, and on the side of a mountain and also had beautiful gardens. As well as the buttons she also had all the old display cabinets, with little tiny drawers and huge panels. It, again, was amazing. A couple of years later, when visiting my sister, we went to the house again and they were gone. My sister later heard a rumor that they had moved to Vancouver. I could never find her again and I don't know what happened to all the buttons. Sorry for such a long, rambling comment but I thought you might find this information interesting. Janice
August 16, 2018 at 10:30 AM

Laurie said…
So good to see you again, Gerry. I love to read about and see photos of your button art! Beautiful, wonderful and your dedication and attention to detail are just so inspiring!
August 18, 2018 at 12:09 PM

Debbie-Dabble Blog and A Debbie-Dabble Christmas said…
o MY!! How pretty! You are a true artist!! Thanks so much for stopping by and for your kind comment! the yellow rose pitcher was a gift from a dear friend!
Hugs,
Deb
August 21, 2018 at 6:26 AM

Yesteryear Embroideries said…
Loved reading this and your work is so lovely!
August 30, 2018 at 3:45 PM