Showing posts from 2012
Show all

December 29, 2012
Our local Evening Star Button Club recently enjoyed their holiday partyat my home.  I thought you might enjoy seeing the handmade button gifts we shared with one another.
You may click here to view it directly Vintage Connections

A gift of buttons 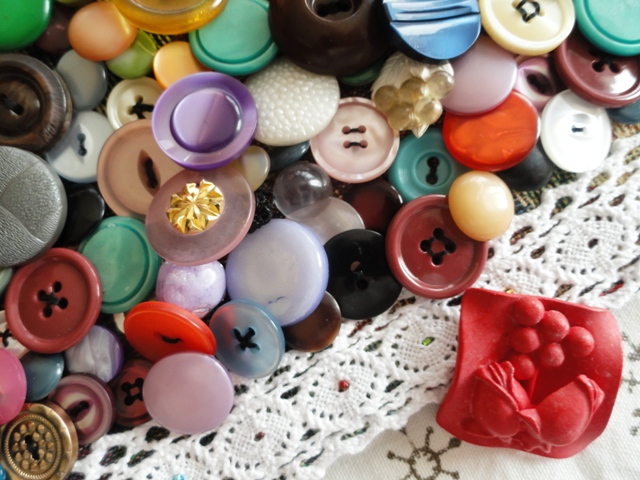 Did you get anything especially, wonderfully, button-y during your holiday celebrations this year?  If so -- send me a photo and I'll post it on this blog!
Look at this pretty work of art I received! It's a beautiful clutch purse decorated (by hand!) with every color and variety of sewing buttons! Plus, a bit of lace and some beads for good measure. You wouldn't believe how wonderful it feels in your hands! Here's the back.  Can you believe it?  I received it during the gift exchange at my button club's Christmas luncheon!  (Please feel free to "like" our Facebook page and keep up with all the button fun!) Idell made it; she and I have something beyond buttons in common: we both moved to Colorado from the same town in California.  But, I never met her when I lived there. I know if I had -- we would have been friends! I hope some buttons found their way into your Christmas celebrations!
3 comments
Read more

More from the ornament swap! 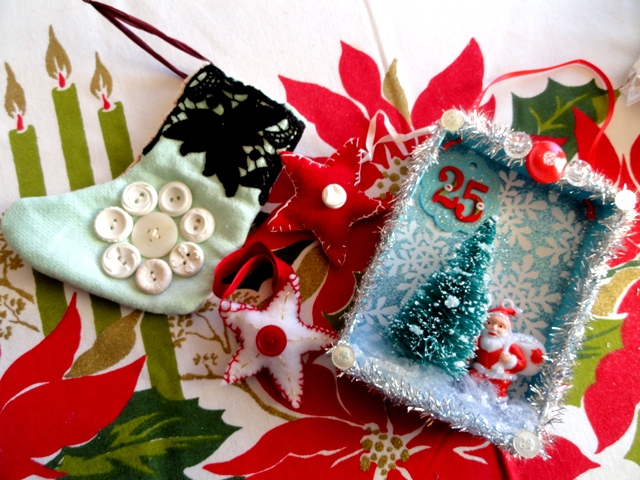 Here are the ornaments that I received in the swap; it should have been four, but one of the participants never sent hers to any of us, unfortunately.
The stocking on the left was made by Wendy. The stars in the middle, by Laura. The cute Santa box is by Pam. I hope everyone is preparing for a great Christmas holiday!
9 comments
Read more 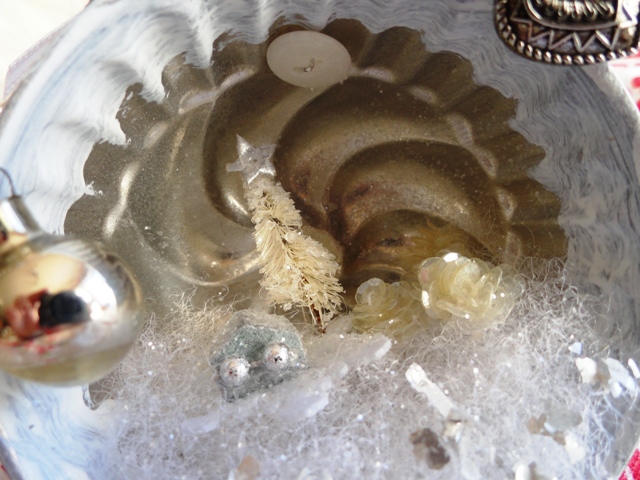 Here is the ornament that I made and sent to my swap partners in the Button Floozies Christmas Ornament Swap! I made it from a vintage Jello mold tin that I painted, glittered, and filled with snowy things! There's a little vintage Monopoly house and hotel -- the old, wooden ones -- that I painted white, as well as a bottle brush tree and little sequined trim flowers that look like snow-covered bushes. The hanger is held in place by a mother of pearl button, and the rest of the required buttons for the swap are dangles hanging from the top.  I love making these! If you'd like to see more ornaments, check out the Button Floozies Swap group flickr page!
9 comments
Read more 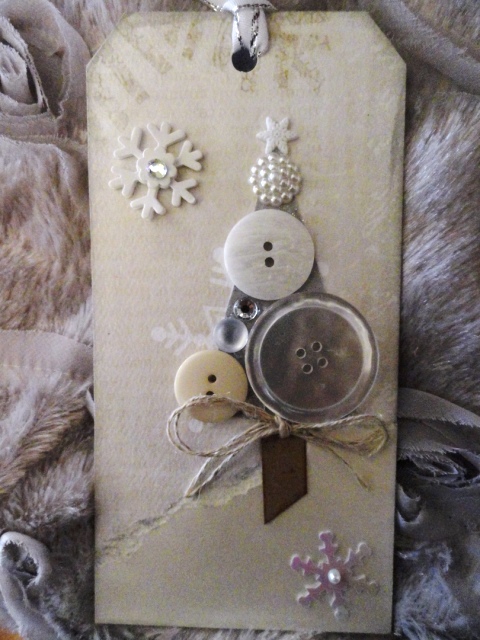 I participated in a wonderful White Christmas Tag swap where we each made and exchanged 16 tags.  Most, but not all of them were winter white-themed.  Here's my favorite:
Can you guess why?  Beautiful buttons and simple but elegant design!  It was handmade by Garna Barker.  If you'd like to see the rest of the tags from this swap, you are invited over to visit my blog post about it!

Kathy's having a button giveaway

I was delighted to visit one of my favorite blogs, Kathy Uhrig's Kluless, and see that she was having a giveaway that I know you all will want to get in on!
Kathy really should be a Floozie and post over here at Button Floozies -- she has a fantastic button collection and she is at true lover of all things tiny and precious.  And an avid blogger.  Maybe if enough of us ask her?

She's also an artist and you can often see articles she's written in those wonderful Stampington magazines.  You will enjoy your visit to her blog!
2 comments
Read more 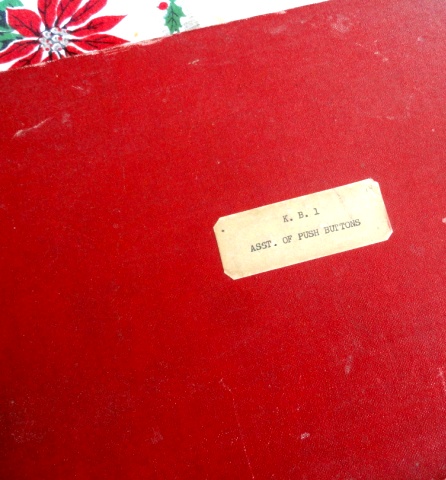 I've been on the lookout for more vintage boxes to use as button storage.  The other day, I found one and ordered it from an Etsy seller: It's a flat, red box made of very heavy paper.  The linen-like cover has a label that says, KB1, Asst. of Push Buttons.  Even though I'm pretty sure they're not talking about sewing buttons, I thought that was fun and rather fitting! I bought it because of all the cool little compartments inside; here, as you can see, I have begun to fill it with some of my vintage buttons with paste, or rhinestones, or jewels of any kind.  I even put a few in that have little formica flakes; those are called composition buttons. There's nothing special about these buttons except that they are older.  And that I like them. They're not valuable, but they are important to me. I am so loving playing with my buttons!
10 comments
Read more 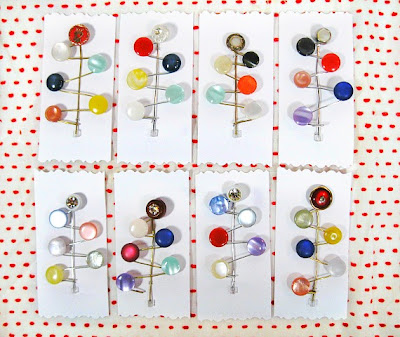 Last year I found instructions on making a Christmas tree pin with small shank buttons and wire. I made some and sold most of them at a neighborhood craft show. then forgot about them until this holiday season started to roll around. I searched everywhere for the directions--on the web, in my bookmarks, in my magazines--to no avail. So they were created from memory and are for sale in my Etsy shop, autena.

They are rather abstract and I have used some non-traditional holiday colors, like aqua and peach.

For the top of the tree, only rhinestones or mother of pearl would do, except for one that has a gold crown on a red button!

Now you'll never guess what happened--or maybe you will. I was looking through my documents on the computer for something else as I wrote this and, sure enough came upon the directions! Wouldn't you know it? But that's great because now I can share them also.   I dare not reprint them without permission, but will give out the link to the download ($…
7 comments
Read more

Hi Button Floozies,
I haven't posted here in a while...you know how life gets.  And with my sickness of crafting, my time is everywhere....charms, jewelry, paper, buttons, blogs, groups, etc. there just isn't enough time. I've visited often though.

Recently in one of my groups, ArtCharms (a yahoo group), we had a swap of charms made of buttons.  With this swap, one of the participants, Cris Peacock, made a bracelet with all the charms she received.

I asked her permission to show you guys the awesome bracelet she made.  Visit her blog for more detailed instructions.

I hope you enjoyed her bracelets and stop by to say hello.

You know we all have a little Button Floozie in all of us!! *wink*

Have a great week!
Bev B.
9 comments
Read more 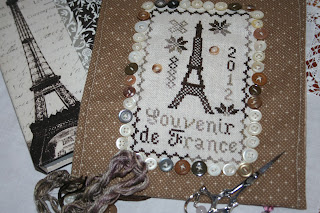 I made this little pocket for an exchange gift.  I used an assortment of buttons to frame the cross stitch.  Almost, if not all, of the white buttons are mother of pearl; the others are not.

The little memo portfolio that I found determined the design that I stitched and the colors that I used.

This worked out so well that I may make a second one as a Christmas gift.  I may use fewer buttons because they make the pocket quite heavy.
5 comments
Read more 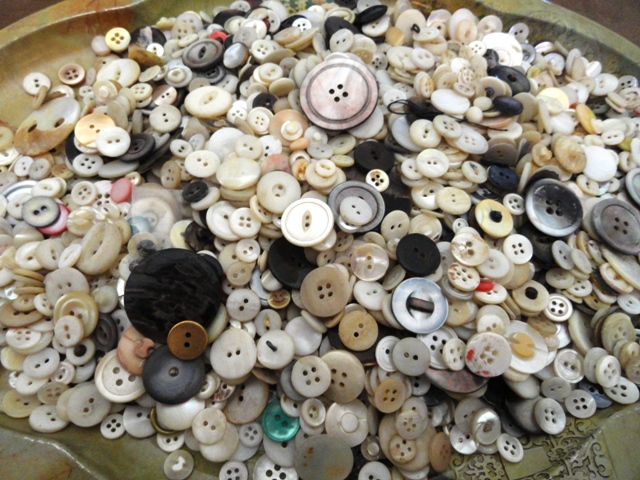 I was so inspired by reminiscing about Tami's buttons (see previous post) that I spent some time yesterday playing with my mother of pearl buttons!
The photo above shows my "unsorted" mother of pearl buttons that I grab freely from when I am creating.  They are spread out on a platter, but normally they 'live' in a glass jar in my kitchen so I may admire them, always.  The other day, I moved some of my collection into a vintage jewelry-box-like container.
These are special to me because they are carved, intriguingly shaped, paired with other materials, are interesting colors -- or are just very old.
I have so much fun sorting them!  At the top of this photo (above) are buttons that are especially bright and shiny, and none of which have any particularly special carvings -- just circles.
Some I consider special simply by virtue of the fact that someone, long ago, took the time to string them together.
The ones at the top of the above photo are special to me becaus…
12 comments
Read more 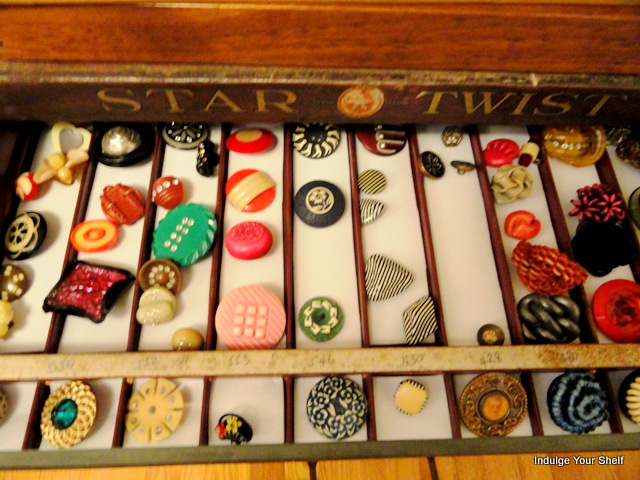 It is always fun when you find your so-called "tribe" -- for me, those people are, of course, button floozies!  You may recall I recently took a trip to Kansas City and enjoyed the hospitality of Tami, and she is, among other things, a world-class button collector!
Tami graciously allowed me to photograph -- and gave me permission to share with you -- some of her collection.  Thank you, Tami! First, let me say that she has her buttons impeccably stored/arranged/displayed. Because of this -- the enjoyment of her button collection is multiplied! There is an office/room devoted to her collection, the likes of which most of us can only DREAM of having! An antique-lover, she has some beautiful vessels in which to display some of her prized buttons. In the middle of this bowl (above) is a shell that was used to create some buttons -- isn't that a fun visual piece? Beautiful button art pieces... and something fun and whimsical everywhere you turn!

Laurie
I'm passionate about pretty things and find beauty in shabby and well-loved stuff. I've never met an antique or thrift store I didn't like. And I love to rescue the old and forgotten and make it useful again. Come along and see what I've found and created!